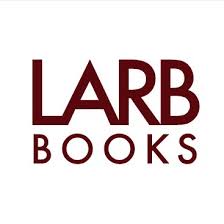 LARB Books is the publishing arm of the Los Angeles Review of Books.

Still brand new, LARB Books has published a number of books now, including several from our imprint Les Figues Books, the venerable experimental press (oxymoron intended; it was a decade old when it became a LARB Books imprint).

We have also published A Stab in the Dark the earliest know LA Chicano text, Edgar Rice Burroughs The Girl from Hollywood, and Harry Leon Wilson’s Merton of the Movies under our LARB Classics Line.

LARB True Stories launched with In the Belly of Her Ghost, by Colin Dayan.

And LARB Provocations offered Atrocity Exhibition by Brad Evans, Advice and Consent by Yxta Maya Murray, and The Terror of the Unforeseen by Henry Giroux.