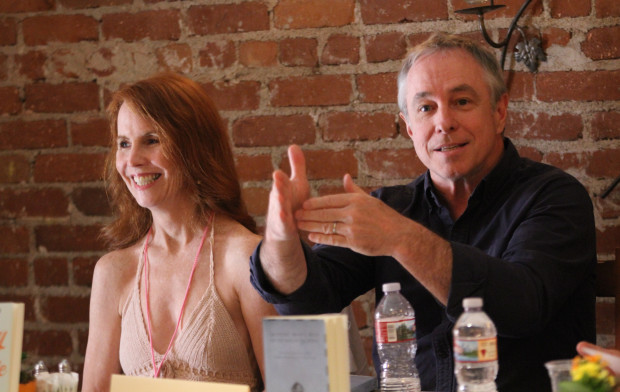 I’ve spoken about a myriad of subjects at universities, festivals, and conferences. The subjects I’ve discussed:

(for interviews with authors, including public interviews, see that section)

“A Life in Letters: A Conversation with Margaret Atwood,” UCR, Riverside CA, February 2019

“Adding Value: What Publishers Do,” and other lectures, LARB/USC Publishing Workshop, University of Southern California, June–July 2018

“The Missing Narrator: A Conversation with Rachel Cusk,” LARB Los Angeles CA, May 2018

“A Conversation with Mary Gaitskill,” Los Angeles, CA, May 2017

“What I Did with My Summer Vacation,” Beyond Baroque, Los Angeles, August 2016

“Mare’s Milk on the Roof of the World,” at East City Bookshop, Washington DC, June 2016

“My Life on the Mattress,” Matratze/Matrize, Bremen, Germany, May 2014

“The Organization of Knowledge,” LA Institute for the Humanities, USC, April 2014

“The End of the Road,” Los Angeles Institute for the Humanities, April 2011

“Publishing: The New Shape of the Book,” LA Times Festival of Books, April 2011

“Writing in the Age of the Internet,” invited, University of Southern California, March 2010

“The End of the Road,” invited, Los Angeles Institute for the Humanities, USC, November, 2009

Introduction to readings by Janet Fitch and Michelle Huneven, UC Riverside, 9 May 2007

Interview, “To the Best of Our Knowledge,” Wisconsin Public Radio, 4 February 2007

“Drowning in My Own Tears,” invited lecture, University of California Riverside, 27 February 2006

“Our Knowledge, Their Belief:  Emotion and the Electorate,” Stanford University, 14 October 2005

“Why They Call it Compassion,” invited lecture, Department of Culture and Technology, University of the Aegean, Lesvos, Greece, 16 December 2004

“The Bloody Crossroads:  A Short History of Literary Value in America,” invited lecture, California Institute of the Arts, 25 April 2002

“The Cosmopolitan Overview and the Prairie Prospect,” Conference on Images and Functions of the American Prairie, University of Iowa Museum of Art, 22 September 1996

“The New Historicism and the New Cultural History,” University of Copenhagen, Denmark, 3 May 1993

“The Management of Diversity and the Burning of Los Angeles,” POROI, University of Iowa, 1 December 1992

“Complaints in the 1920s,” History of Medicine Lecture Series, University of Iowa, 23 January 1992

“Curing the Blues,” College of Pharmacy, University of Iowa, 17 October 1991

“Illness and Adaptation at the Turn of the Century:  Gilman, Freeman, Wharton,” M/MLA Convention, Minneapolis, 4 November 1989

“Heart of Darkness:  Gender, Class, and the Colonizer’s Nerves” Monterey Institute of International Studies Symposium on the Colonial Mind, 21 November 1986

“Making it Big:  Dreiser, Sex, and Success at the Turn of the Century,” Conference on Biography and Autobiography, Center for Research on Women, Stanford University, 13 April 1986